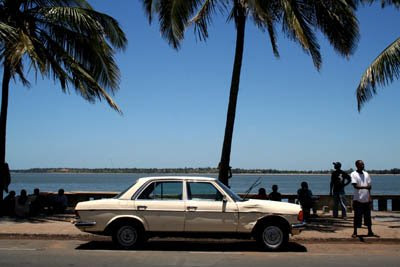 Maputo, the capital city of Mozambique, is positioned on the Southern curve of Africa, where it feels astoundingly out of place. If you are driving toward it from South Africa, you will likely first pass through Neilspruit, a town notable primarily for its mediocrity. It is an unremarkable city of lifeless brick apartment buildings, Hungry Lion takeaways, and Caterpillar sales-yards. Its wide streets are open to the sky, feeling a bit like a long yawn triggered by the lazy warmth of the afternoon sun. All the more surprising then, when one departs this sleepy city, crosses the border, travels several hours through dry scrub and bush, and appears suddenly in a town that seems to have been lifted out of the Technicolor tropics, transported from a Caribbean musical, and left on Africa’s shore.

The air in Maputo is sticky with a tropical torpor, which its energetic Modernist buildings seem to rebel against, vibrating in angular forms and ice cream hues of rose, lime and buttercream. Flames of bougainvillea lick against the balconies of decrepit villas, and flamboyants litter the uneven pavement with their fiery petals. Not to be outdone by their spectacular surrounds, Maputo’s citizens dress with an equal measure of finesse. Men stroll in sleeveless shirts and calf-length shorts to catch the sun; women wear bright hues, in spaghetti straps and slip-on-shoes if young, in wrap skirts and headscarves if old. 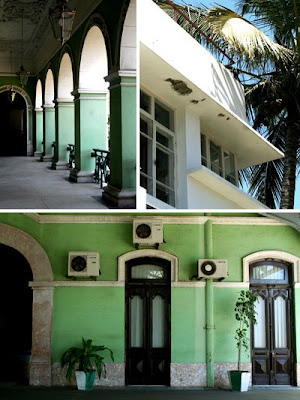 As a city, Maputo has more of a sense of history and architecture than anywhere else in Southern Africa. This grandiose vaulted market was built by someone; that art deco movie theatre was built by someone else. Perhaps most impressive is the city’s train station, a pistachio coloured confection that, depending on who you ask, was designed by Eiffel himself, or, more likely, a student of his. A heavyset tower marks the entrance, its iron dome shielding a baroquely ornate clock. Inside, travellers stroll through arched colonnades en route to catch their trains. 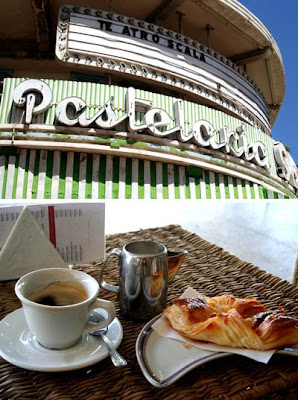 In mid-day, the sun can be brutal, so it’s the best time to slip under the awning of a sidewalk café. Face to the street for people watching, and spend a leisurely afternoon sipping strong coffee, sweetened with bites of a sugary pastry. The darkened interior of one such corner spot was decorated with a sprawling world map, browning now from age, that hints to an era when the city was still known as Lorenco Marques, and still a destination for the adventurous jet set. 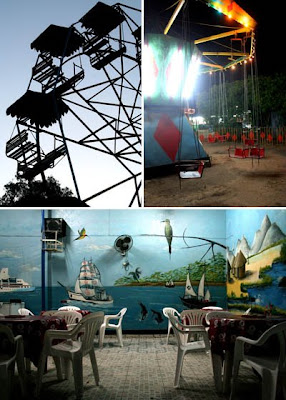 Nearing sunset, ones attention is drawn to an old carnival ground near the waterfront. In the sunlight, it had seemed deserted; Ferris wheel caught midair, cars hanging as if stopped mid-sentence. But at night, there is no trace of abandon. Electricity switched on, the amusements are now studded with the pinpricks of light from hundred of glowing light bulbs. But most of the visitors have not come to wait in line at the carousel. Instead, they’ve come for the nightlife: the village of bars and restaurants that roll up their shutters after sunset. After a meal of flame-grilled chicken, they move to the low-key bar next door, to savour a beer in the seaside cool of a Maputo evening.
Filed by Alexander Santillanes at 18:08 4 comments: