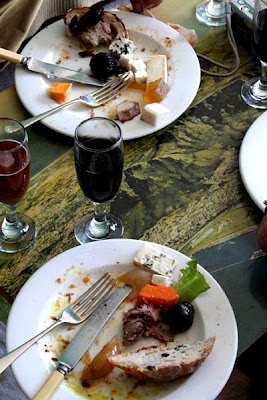 Early on in the planning stages of our nuptials, Bordeaux and I peeked into a wedding magazine together. It was filled with images of white gowns and bridesmaids—and not much that applied to us. So we realized early on that we wouldn’t be doing much as usual with our wedding. In the end, this meant greater freedom—we could have our wedding however we wanted. Our wedding day was relaxed and very casual, centred around celebrating with our family and friends and, of course, enjoying a delicious meal. 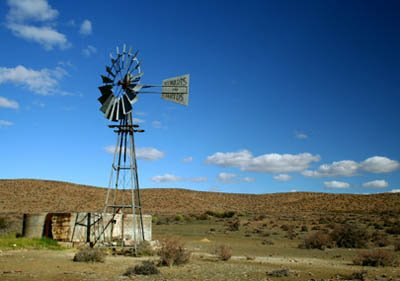 Theme:
Since the announcement of our engagement coincided with our return to South Africa several months ago, we decided to go for a distinctly South African wedding. In particular, we focused in on the style and food of the Karoo, the arid semi-desert that fills much of South Africa’s interior. We had visited the region together on a road trip shortly after we started dating, and in some ways the desolate landscape seemed an attractive counterpoint to the usual frilliness and extravagance of a typical wedding. 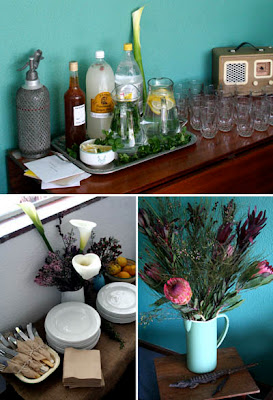 Style:
In keeping with the Karoo theme, we went with something spare, domestic, and slightly retro. A simple sawhorse table was set up for the buffet, and covered with raw hessian. Food was served on wooden cutting boards and a mix of retro plates and platters in creamy shades of blue and pale yellow (we found many of our serving platters among the treasures at the Milnerton Market). We borrowed some vintage chairs from our friends to fill out our under-furnished apartment, and set up a bar on an antique table. Bordeaux’s mother arranged bouquets of indigenous flowers, such as proteas, fynbos, and calla lilies, adding some subtle colours. Bordeaux’s family also very kindly brought down several beautiful aloes with them from their home in Limpopo—they transported them so carefully that two of the aloes still had their tall flowering stems in tact. 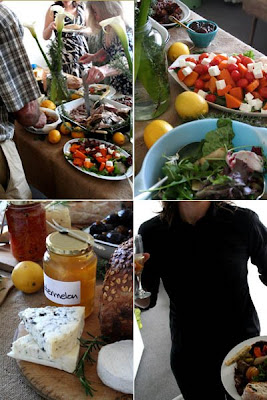 Food:
The one thing Bordeaux and I obviously had to have at our wedding was incredible food. To fit with our Karoo theme, we served a boerekos feast of traditional Afrikaner dishes. We had a great time doing the sourcing for the wedding. Since we were doing the wedding so small, we didn’t have to bother with caterers, and could instead really just have the foods we love and enjoyed. We were also able to source each menu item and ingredient individually, which ensured that we were shopping locally, and working with small-scale producers. The highlight of our meal was a delicious Karoo lamb (which we actually picked up several days earlier from a butcher in the small Karoo town of Prince Albert), roasted with rosemary and garlic. On the side was a butternut salad with goat’s milk feta (one served with roasted cherry tomatoes for the vegetarians, and one with biltong- a dried South African meat- for the carnivores). In addition, we had a massive spread of artisinal breads and locally made cheeses. There were accompanied by jars and jars of interesting preserves that we gathered from different farm stalls, like green figs in syrup, gooseberry and granadilla jam, and apricot and walnut chutney. And all of this was of course served with many bottles of South African wine. Just before our guests arrived, I looked over the spread we’d set out on the table, and joked to Bordeaux that he had probably never expected to serve boerewors and biltong at his wedding. But somehow, it felt perfect—delicious, relaxed, and unfussy, the kind of food people went back for thirds of. 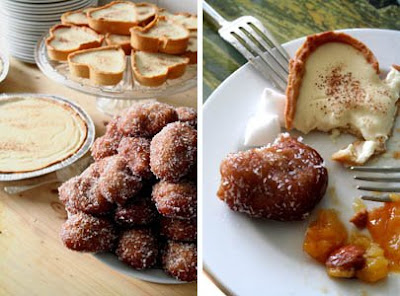 Cake:
Since there were not going to be any big white gowns at our wedding, a big white cake would have felt just as out of place. In its place, we offered some local desserts. We had an array of milk-tarts (creamy pies sprinkled with cinnamon), and koesisters,
(syrupy and spicy Cape Malay coconut donuts). The milk-tarts were made by a friendly trader at the Neighbourgood’s Market (she sweetly surprised us by making the smaller tarts in the shape of hearts), and the koesisters came from a woman who bakes them in her home in the Bo Kaap (an historic Muslim neighbourhood of Cape Town).

The day worked out perfectly—we even had brilliant summer weather, despite it being the middle of winter—and we were able to totally relax. The South African theme worked well since we were able to really take advantage of the best foods the country has to offer, but it was also a tribute to my adopted country. After all, the right for Bordeaux and me to get married is one we don’t yet have in my country, but one that thankfully we do have here.
Filed by Alexander Santillanes at 23:47 8 comments:

Sorry for the late notice... but I got married this weekend. More on that soon!
Filed by Alexander Santillanes at 15:02 12 comments: 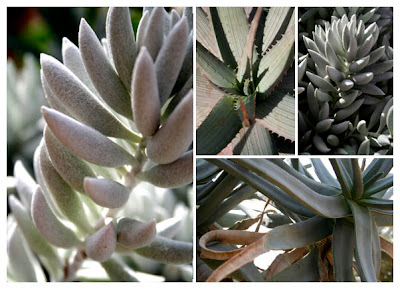 While browsing among the exhibits at gorgeous Kirstenbosch Gardens on a recent sunny morning, I couldn't help but be taken with the amazing hues of the local plants. In particular, I loved the silvery-green shades of some of the aloes and the fynbos. An understated but warm colour scheme with a nicely masculine edge.
Filed by Alexander Santillanes at 00:13 2 comments:

Colors of the Cape: Blue 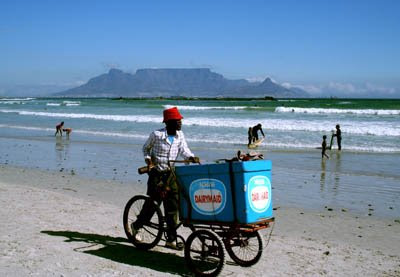 “It was blue, all blue, blue was the colour of the Cape.” –Marlene Van Niekerk, ‘To Behold the Cape’

Blue is the colour of the two oceans that surround Cape Town, twisting the little peninsula of land between Indian and Atlantic currents. It is the colour of Table Bay, which from certain vantage points, the whole city seems ready to slide into. It is the colour of the vast, empty sky that lies open above the city on clear days. And it appears even in the land, in the rocks of the flat-topped mountain that defends the city, so that seen from a distance, the city itself seems but a thin ribbon between blue water, blue earth, and blue sky. 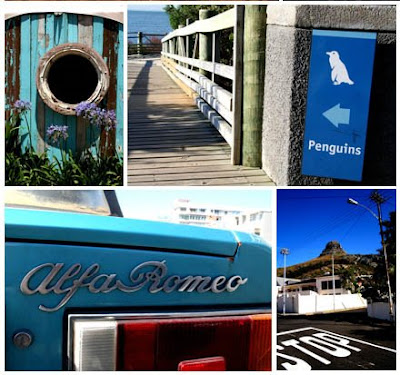 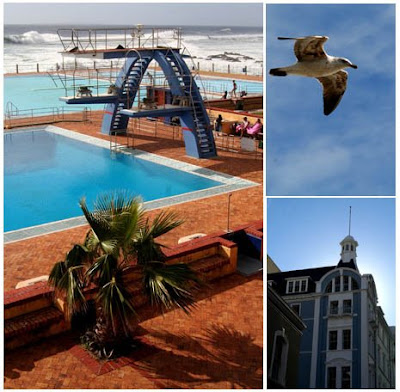 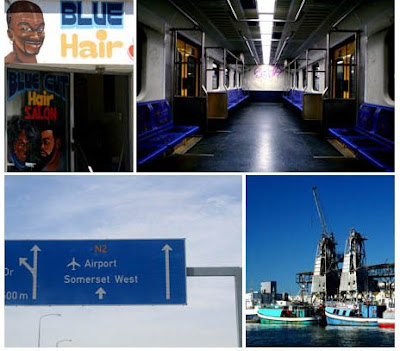 Filed by Alexander Santillanes at 20:39 5 comments: 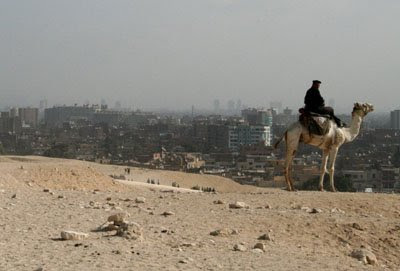 My only trip to Africa north of the equator took place almost four years ago, at the end of 2005. I was on a journey along the crescent of the eastern Mediterranean; from Istanbul to the centre of Turkey, through Syria, to Beirut and back, and down through Jordan to the blue shores of the Red Sea. It was a bizarre and unforgettable trip, taking in humble cave churches and gleaming mosques, abandoned desert ruins and crowded souks. Egypt would be my final stop. From my plastic chair at a dockside café, I could see the distant peaks of the African coastline. It seemed to me at the time to be waiting for my return. Though to be honest, Africa cared very little about either my movements or myself—it was I who couldn’t wait to be back. 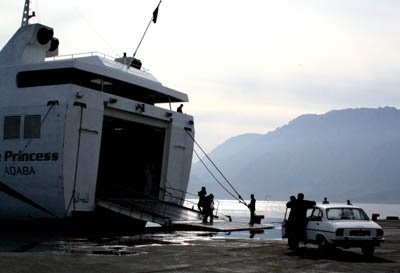 I would be reaching Egypt by ferry, and though it was a short journey, it felt strangely romantic to be approaching the continent by ship. Or at least, it had the potential of being romantic. The ship was perhaps too commonplace, too modern to fuel any fantasies: grey upholstery seats, and TVs blaring action movies in Arabic. I didn’t have to enjoy these movies for too long, however, before we were unloaded onto Africa. A thick blue light burnt into my eyes as I stepped off the boat; it reflected off the green-blue sea and against the golden hills of sand. I was running out of time before my departure ticket, and therefore I had no chance to see the Sinai Peninsula, unfortunately. So it was onto a bus, and straight off toward Cairo. 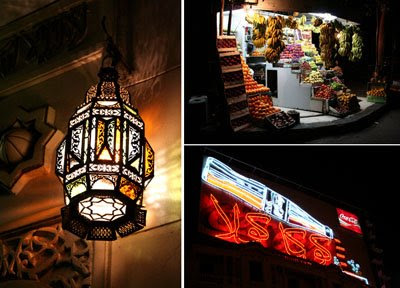 I had come to Egypt expecting the pyramids, expecting the Valley of Kings, expecting Luxor. But I hadn’t come expecting Cairo. My face pressed against the window of the bus, I looked out to see a city lit up in the night: towering mosques with spotlights; shoe shops and fruit stands and cafes glowing along crowded avenues; neon lights blared, the words ‘Coca Cola’ switching to Arabic script as the giant bottle emptied itself; and all these lights reflected in the murky silent Nile. 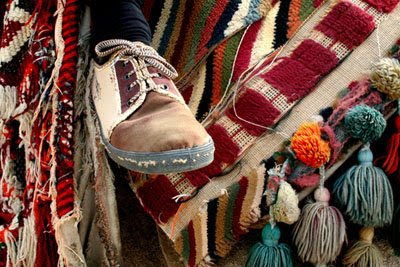 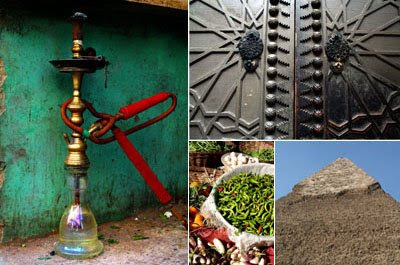 Over the next few days, I would come to see how strange and fantastic Cairo really was. It was so long ago that I no longer remember the route my days followed, instead, I can only picture a strangely incongruous mesh of images. The old pink museum, stuffed with sarcophagi and stele. Stylish student cafes, selling muffins and non-fat lattes. Souks packed with fresh fruit, caged ducks, and baskets of chilli peppers. Tacky hotel souvenir shops. A dusty old city, seemingly transported in tact from the pages of 1001 Arabian Nights. Even after all of the other places I have been, Cairo still seems one of the most unusual, the most distinct. It seemed to me a strange melding of the journey I had just completed, and the journey I was about to begin. I could see traces of Syria and Jordan in the culture, the architecture and the food, but I felt too that I was clearly on African soil. As if Africa had drifted like silt along the Nile, to be deposited at the foot of the Middle East. 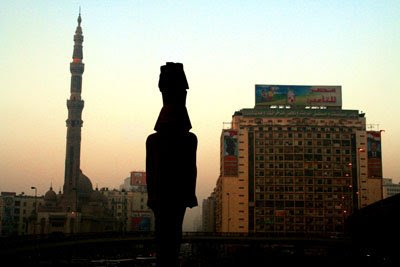 It seems even stranger now, looking back to it from the quiet avenues and ordered apartment blocks of my home in Cape Town. It seems like it should be much farther away, on a far more distant part of the globe. But it sits on the continent as well, on nearly the opposite corner from Cape Town, reflecting back a very different Africa than what we see from here. Africa is but one story, and Cape Town and Cairo are merely two very different tellings.
Filed by Alexander Santillanes at 22:31 2 comments: