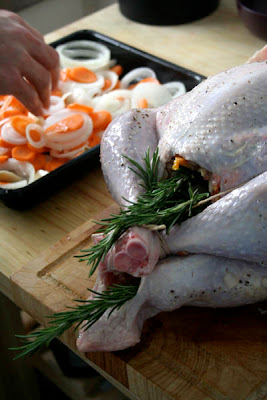 Currently, there is a turkey roasting in our oven, releasing the sharp scent of rosemary into our apartment. Meanwhile, two pumpkin pies are cooling in our kitchen, their smooth golden-orange surfaces flecked with traces of cinnamon, nutmeg, and ground ginger.

This might sound fairly normal, it being Thanksgiving and all, but it came as a bit of a surprise to me. For the weeks before, whenever the mention of Thanksgiving came up, I shrugged it off with little thought. I haven't celebrated the holiday in five years, the last time I spent a November in my hometown of Albuquerque, New Mexico. Since then, I've spent the holiday traveling in Syria, studying in South Africa, working in Thailand, and stuck in the Incheon airport in Seoul; never once did I consider trying to celebrate the holiday abroad.

But a few weeks ago, Bordeaux begun to suggest more seriously that we celebrate it; primarily, I expect, because he was curious to try roasting a turkey. So I changed my mind. We have a good sized group of friends here, we know someone with a beautiful house who can host, and in the end Thanksgiving gave us a good chance to have a party and further develop our cooking skills.

Not the traditional reasons for celebrating the holiday, basically. But then something happened in our kitchen to change the feeling just a little bit. With Bordeaux in charge of the turkey and stuffing, and most of the side-dishes doled out to friends, I was put in charge of making two pumpkin pies. It wasn't exactly a seamless process-- our kitchen got too hot to properly make the buttery crust, and I misread one of the liquid ingredients and had to chuck in some baked gem-squash to even out the mixture (those are soft, edible gem-squash seeds you see in the pie below, as a note). But when I took the first pie out of the oven, I was hit by the warm buttery scent of nutmeg, ginger and cinnamon. It was the exact same scent that would greet me on Thanksgiving morning as a child, when I would go into the kitchen and smell the baking pumpkin bread. And, unexpected to me, filling my own kitchen with this same scent made me feel a lot better than I would have expected it would. 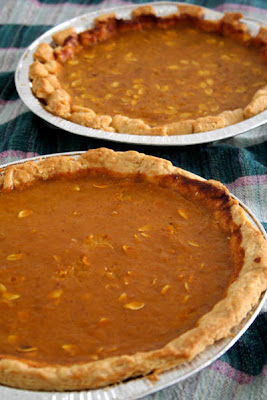 Only after our planning got under way did I realize that this will by my and Bordeaux's first Thanksgiving spent as a married couple. And though I hadn't thought it would matter to me, I'm actually rather glad that we're not just letting the day slip by. We're filling our home with the fragrances of spice, butter, and roasted turkey, and tonight we'll share a staggering meal with our friends. And though I can't say with confidence that I think the pumpkin pie we have for dessert will be 100% perfect, I can at least relax knowing that we'll have lots more Thanksgiving to develop a better one. Which is something to be very thankful for.
Filed by Alexander Santillanes at 20:16

"When the care-wearied man seeks his mother once more,
And the worn matron smiles where the girl smiled before;
What moistens the lip and what brightens the eye,
What calls back the past, like the rich Pumpkin pie?"

My Thanksgiving in Japan.

Impressive! I spent Thanksgiving in Las Vegas... seems so un-American. Or is it? The strip was packed... and I thought I'd be the only one there. :)

I'm so happy that you finally celebrated thanksgiving! .. it is a very very fun holiday and though we are muslims , we dont really celebrate it here in Kuwait.. but since I'm always on the look for family gatherings and entertaining ideas .. so my hubby and I decided to roast turkey and enjoy the " theme" of thanksgiving..

Hope you enjoy it every year from now on :)

by the way , I'm also following your blog on my other name " http://madamesucre.blogspot.com " as madame sucre